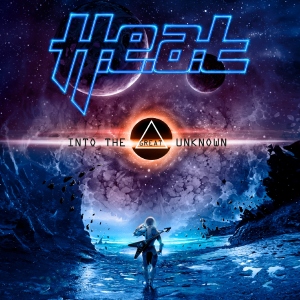 There has been a lot of hype and anticipation around Swedish rockers H.E.A.T and their upcoming fifth studio album Into The Great Unknown. The band have already unleashed a couple of tracks Time On Our Side and Redefined, which managed to raise a number of different opinions about the obvious progression in the band’s sound and creativity.

END_OF_DOCUMENT_TOKEN_TO_BE_REPLACED

Here’s another round of various tracks for you to check out from artists/bands, you might not have heard of yet.

Play it loud and enjoy!

Great Western are a hard rock band based in South-East London whose EP, Warrior of Light will be released online in October. Rufus Miller (lead vocals/lead guitar) and twin brothers Ralph Fuller (drums, backing vocals) and Frederick Fuller (baritone guitar/backing vocals) are taking on the London rock scene together with other bands and friends such as Turbogeist, Arrows of Love and Whales in Cubicles.

The band has recently released a VHS video (yes, VHS!) for their EP’s opening track Son of a Gun, which you can watch below and experience something quite different.

There is something truly captivating about Great Western‘s sound, as it slowly creeps under your skin, track by track, and you cannot deny but envy the dark beauty of the guitar riffs and vocal screams. The songs offer some kind of inner release and let you enjoy everything you love about quality hard rock music.

Here’s an interview with Fred (baritone guitar) about the band, their music, friends and what’s next.

Can you tell us a bit about your musical backgrounds and creating Great Western?

Myself and Ralph grew up in Wakefield and played in bands. We moved to London and I met Rufus on my first day of University. We all studied fine art. At the time he was playing tons of shows as a solo guitarist/singer. We started playing music together and eventually our tastes have come full circle to all the rock and metal we grew up listening to; our sound evolved. It was a gradual process and I think around 2009 we started what we now know as Great Western.

Your EP ‘Warrior of Light’ will be released online in October. How was the recording process of it?

We recorded it in around 4 days with Al Lawson at Long Island Studios in west London. If I remember correctly, Rufus had sessions booked in playing session for his sister Misty Miller and recording his other band Popskull. Myself and Ralph had time booked in with our band Bones, so somewhere in between we did the Great Western stuff and eventually tracking bass and mixing at Kore Studios couple of months later.

How about the video for ‘Son of a Gun’? Where was that shot?

Well some would say that the VHS tape was found buried deep under a pile of rocks next to a Derelict cottage, other say it was filmed by the Messrs group at Dropout Studios, Camberwell.

What special characteristics do you think make you stand out as a band?

I always use a baritone guitar live, that has a particular sound that sets us a part from others. We try and get quite a few different metal and rock styles in our songs and we aren’t, for example a straight up doom band or hardcore band. I would feel very constricted playing those styles all the time. Oh and two of us are twins so we have twin vibe.

Do you normally work at songs together? And what is the best atmosphere for you to write music?

The songs on ‘Warrior of Light’ were all done together, mostly out of long jam sessions and usually that’s the best way, for everyone to be in the same room. Ralph wrote a lot of the lyrics for it but recently things have gone the other way, with Rufus writing all the words on our new songs. We prefer to use Dropout Studios in Camberwell and try not to go to any other London studio because most of the rehearsal studios in London are overpriced wall carpeted sweat boxes! Rehearsing is sometimes a great release from the constant grind of London, so it can be good to play and get rid of any bad vibes. More often than not, it’s good to put the guitars down for awhile and come back when you feel that burst of inspiration.

What do you think is the main attraction of your live gigs?

The main attraction is loud kick ass riffs for beer drinking hellraisers! We’re not pretentious in any way so we have fun and rock out, we do take our songs seriously but we’re not afraid of making fun of ourselves. We know that heavy music can be pretty silly sometimes.

You are friends with bands like Whales in Cubicles and Arrows of Love. Do you guys go to each others gigs and support each other?

Yeah, we all try to go see those guys as much as we can. We have helped Whales in Cubicles out on a couple of their videos and hope to collaborate in the future. Nima from Arrows of Love is releasing our ‘Warrior of Light’ EP on his own label ‘Handspun’. He’s been a fan of our music for years. It’s cool, there’s a great group of rock bands in London right now and we regularly chat and go to each others shows. I’m listening to a lot of LTNT and Turbogeist. Luis from Turbogeist sings on one of our songs called Culture War. It’s on the EP right at the end.

What do you think is the most difficult thing for any upcoming rock band these days?

The most difficult thing is funding and paying for the day to day of being in a band. That’s always hard.  Finding the balance between work and play, particularly in the city of London is difficult. We’re in an age when bands get record deals based on hype and youtube plays, getting your music in the right place online and being heard over the 1 billion other bands is difficult.
On the upside, I think that the music out there is better than ever, there are so many ways artists can create, present and perform music, and that’s the fun part.

After your EP release, are you planning any live shows or recording some new material?

We are planning on writing an album, and have started the ground work. Our new song Hearse can be heard over at greatwesternband.com. That can give you an idea of the direction we may be heading in. We’ll be booking more shows when Rufus relocates from Newcastle back to London and are hoping to branch out further, once we have the EP distributed online.

‘Warrior of Light’ is released digitally online through Handspun records October 22nd, and we will be playing Catch Bar on Thursday 25th October.

(Click on the image to listen to the EP)