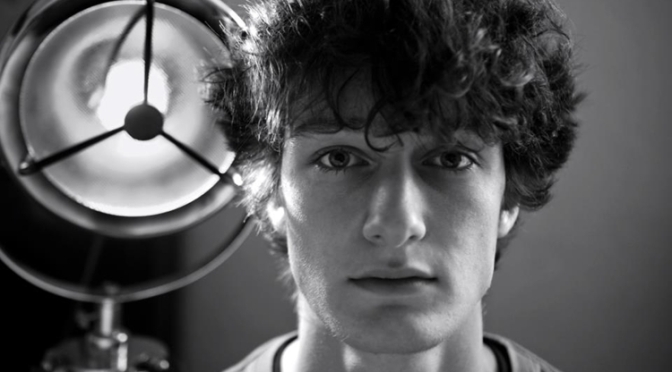 If you haven’t heard of a young musical genius called George Barnett just yet, then take a note right here. A few months back, this talented 19 year old English singer-songwriter and producer have caused quite a storm with his remarkable cover of Daft Punk’s Get Lucky, that has reached nearly 8 million views on YouTube and got praised by both Pharrell Williams and Nile Rogers. Some say it’s even better than the original. Agreed.

George has been making music since the age of three and drumming was his first love, until he discovered that he can actually also write and perform pretty good tunes. So far, he’s gained a huge success with his two self released EP’s and a full length, and right now working on his upcoming EP ‘Animal Keeper’. He’s recently unveiled a new video for the title track, in which you can admire the various musical skills of this young musician. The great thing about George is that he can perfectly master any type of sound while keeping it fresh and always interesting. Clearly, there is nothing less to be predicted than a very successful future ahead of George Barnett.

In our following interview, George talks about getting into music, upcoming EP, touring with Frank Hamilton and his future ambitions.

You’ve started to make music when you were three years old. Can you tell MGMB about the journey since and becoming aware that making music was the right path for you?

Yeah, my mum used to run a nursery and there was a lot of music there. One day a woman called Jane came and played piano for us and I was hooked from then on. I knew it was the right path because really there wasn’t anything else that interested me as much.

You seem to be able to play every instrument there is! One of your great achievements is the UK national title ‘Young Drummer Of The Year’. So when exactly did you realise you also wanted to write songs and sing?

Until a few years ago all I wanted to do was drum. But then I thought maybe I could write some songs, so a couple of years ago I started writing. I wrote a lot of songs before any of them were good enough to show people.

You’ve self released two EP’s and a full length already and have recently unleashed a new video for ‘Animal Keeper’, the leading track of your upcoming EP. How does this one differ from your previous work in terms of writing and the sound?

It’s definitely more rhythmic – and hip hop influenced. The percussion and claps are loud but the tempo isn’t fast, which makes it groove. It’s less of a nice melody, more of a dirty riff.

You also shoot and edit your own videos. And they say men can’t multitask! Was it the same case with the video for ‘Animal Keeper’?

Yeah. I really like to do everything myself, I am really particular about editing the videos – they have to work with the song. This time I wanted to make it a bit differently. I wanted the video for Animal Keeper to have the same homemade feel that my videos have, but I wanted it to be a step on from that. So I had the concept. I usually position the cameras myself but I wanted more movement so I needed someone to hold the camera! I worked with a guy called Will who lives locally to me and makes videos. He was brilliant to work with. And it meant there were two of us setting up the shots. Then I took the footage and edited it to the track. It took ages actually.

Tell us about the Daft Punk cover of ‘Get Lucky’, which is amazing by the way. How does it feel to get 8 million views and to know that Pharrell Williams and Nile Rogers have seen it? Have they given you their opinion on it?

Yeah, it was a surprise that it got so much attention. Pharrell Williams and Nile Rogers are aware of it – they both sent me nice messages.

So what’s the best environment for you to create music and are there any other artists that have influenced your work?

I mostly get a song late at night and it’s not until the next morning that I know if it’s worked. I don’t really get influenced by anyone directly but like I said, Animal Keeper is much more hip hop influenced than previous songs and I’m listening to a lot of hip hop right now. Sometimes it’s not an artist that influences you, it can be a book, a film, a poem, a painting or an experience.

You’re in the middle of UK tour at the moment? What’s it been like so far and what do you enjoy the most about performing to a live audience?

It’s been amazing. I’m supporting Frank Hamilton and he’s great to be on the road with. Me and the band are half way through it right now and just had a day off, which we needed as a few of us were getting colds but really you just want to keep going. You can spend a lot of time in your room writing and recording but playing live and seeing people in the crowd who know the words is really good. Yeah, we’ve played gigs before obviously but it’s nothing like the experience of going from one venue to another up and down the UK night after night. We’ve become pretty fond of Travel Lodges and know the best place to get a good breakfast in most of the major towns and cities!

How do you spend your time on tour when having a bit of time for yourself?

Well this time around I have been mixing the other tracks for the Animal Keeper EP. It’s quite difficult to do that when you’re travelling. I’ve already missed my deadline – twice. Otherwise it’s eating, sleeping, having a laugh, unloading and loading equipment and recently drinking loads of honey, lemon and ginger – and we’ve all been eating raw garlic too to fend off colds.

And finally, what’s the biggest ambition for George Barnett?

To carry on; this is what I do – I’m not much good at anything else. In the future I’d like to make a film but for now, to continue making music and videos and to enjoy doing that. You have to be connected to what you do – a song has to mean something to you or to someone else. That’s the most important thing. That’s the ambition.