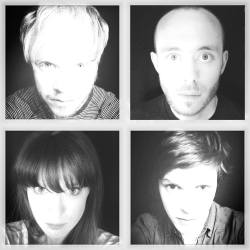 Bristol based four-piece Adding Machine formed in 2011 by Hazel Mills, Greg Stoddard, Andy Sutor and TJ Allen, who have all worked with some pretty great musicians, including members of Roxy Music, Goldfrapp and Bat for Lashes. Their sound features a great mixture of post-punk, 80s synths and beautifully haunting vocals of Hazel Mills. This is the kind of sound that transforms you into a different dimension with its fascinating and mysterious allure.

In the following interview, you’ll get to find out about the forming of Adding Machine, their interesting collaborations, upcoming plans and more.

What’s the story behind forming of Adding Machine?

Hazel Mills: Adding Machine started life as my solo project. Tim (TJ Allen) and I had been working together for a few years on various projects, including Andy Mackay + The Metaphors, and he also produced my debut EPs. Greg (Stoddard) and Andy (Sutor) joined the live band for my album launch in 2010, and we just gelled. The fact that we were having so much fun and that it was becoming really collaborative meant it was the logical step.

How would you describe your sound and what do you think makes your band stand out in today’s music scene?

It’s a mixture of elements of post-punk, krautrock and wonky 80s synths/drum machines. We’ve thrown in a bit of doom on occasion too, and are really influenced by a lot of 70s/80s horror soundtracks. The four of us have quite different musical backgrounds, which often makes for some interesting combinations.

You’ve also worked, or are currently working with some other great artists/bands. Could you tell us about it?

Yes, Tim and I (as I mentioned before) have worked with Andy Mackay (Roxy Music) on his solo album and tour. I’ve also done a few shows with Goldfrapp’s Will Gregory in his Moog Ensemble (a group of 11 odd synth players), and hope to do more in the future – a really surreal and worth while experience! Tim’s also been touring with Bat For Lashes for the past year as a member of the live band. They’ll be supporting Depeche Mode in September, which is pretty nuts.

What can you tell us about your track ‘Ships to Sink’?

It started off as almost a wonky waltz, and was nearly shelved until Tim did a new arrangement (using the instrumentation that you’ll hear on the finished version). The four of us then developed it in the studio together. I love the junk-shop percussion in verse two – we had a lot of fun dropping weights and bags of bottles on the wooden floor in the live room and compressing the hell out of them.

Are you planning on recording some new material in the near future?

Adrian Utley (Portishead) is going to be producing some tracks for us – we’re currently talking dates in the studio in a couple of months when Tim’s back from the BFL tour. Other than that, we’ve been doing a lot of our own recording and demoing at our own studio.

Are there any musicians you admire or got inspired by to become a musician?

There are so many people who have inspired us individually over the years. Here are a few of them:

How is the Bristol music scene at the moment and how do you think you fit in?

There are quite a few pretty great bands around in Bristol at the moment. I saw Thought Forms supporting Chelsea Light Moving a couple of weeks back, and was completely blown away. There’s also Cursor Major, ANTA, Beak>, Fauns. These guys are all friends of ours (and most of which are bands we have played/are playing with) – there’s a definite communal feel to the Bristol music scene.

Where would you like to see yourselves five years from now?

We don’t tend to think that far ahead! Hopefully we’ll still be doing what we love.