The Scottish synth rock band that formed in 2007 in Glasgow might have remained a secret for a few years but not anymore.

Kick to Kill are a band to watch in 2012. With their upcoming new single Avalanche (out May 14th), the word has been spreading fast by people and music bloggers. It’s really not that hard to fall for their incredible, dark and mysterious sound that gets under your skin in no time.

Avalanche is a track that draws your attention with its sound cracking intro and once the vocals kick in, it’s nothing but perfection.

Four members Dave Cook (Vocals / Guitar), Harris Hill (Synth), Lewis Macaulay (Drums / Vocals) and Ewen Shearer (Bass) have mastered a sound that’s been compared to greats like Joy Division, Jesus and Mary Chain or The Stooges but put their own stamp on it.

Their debut album is set for release later this year and it’s said to be a killer record. Another one to surely watch out for!

You can buy Kick to Kill’s previous singles Cut Me and Black Kisses on Itunes. 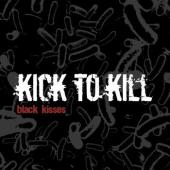